Seminar that brings together the actors in Human and Social Sciences who have appropriated 3D as a real tool to help research.

3D is at the heart of real scientific issues based on multidisciplinary teams and international collaborations.

Publication of the conference scheduled for early 2019

The role of restitution in research on polychromy in sculpture, architecture and mural painting

Trying to find the original appearance of buildings or works from the past is of interest, both in terms of research and valuation. If the restitution of the volumes of architecture and sculpture is a field already largely developed, that of the restoration of the colors remains on the other hand to be cleared. It poses a number of problems, both of methodology and epistemology, which invite reflection on the meaning and purpose of the approach.

When one tries to restore the polychromy with which sculptures and architectures were adorned- interior and exterior -, one encounters a series of difficulties: what process (s) to implement to measure the colours, to give back all their materiality? Should we prefer the digital tool to material reconstructions? If so, what software to adopt, how to choose materials and tools? What choices to make when faced with gaps? How to proceed when the work or the building has undergone several distinct and successive states of polychromy, during its history? In the context of cultural mediation, how can the public be taken into account constructively without undermining the scientific value of the process?

The objective of this international workshop will be to confront this series of questions by carrying out a broader reflection on the objectives aimed at when proposing a colour reproduction of an old work or building. The researcher must admit that he can never reproduce a state of origin, definitely lost. The question of colour rendition invites to wonder about the reasons for colour restoration. Thus, we will also be interested in the history of the restitution and the critical reception of all the methods implemented. 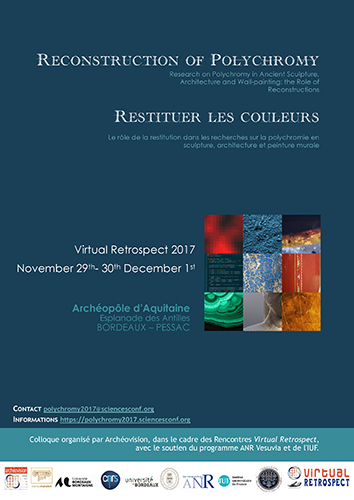 Copyright Archeovision 2022 - All Rights Reserved
Back To Top
×